I’ve never been able to talk or write much about my father, before. Maybe I can now. Daddy died thirty-three years ago. He was only fifty-six years old. He didn’t seem old enough to die when it happened. Today, since I’m sixty-six, I think he died at a very young age.

I loved and respected my daddy.

He decided he knew enough and quit school in the third grade. My uncle who raised him after he couldn’t get along with his step-dad insisted he either work on the farm or go to school. He worked on the farm. Later, he found a love for all things mechanical, Ford cars, Harley Davidson motorcycles, and Chris Craft boats were his favorites. He was one of the smartest men I ever knew. He didn’t have a formal education but he knew how things worked almost intuitively. He would have been promoted to shop foreman where he worked if he had known how to read.

One of the most difficult things I ever saw him do was to teach himself to read a few years before he died. His men’s Sunday school class was emphasizing the need for all to read the bible. He was determined he would learn. He would allow only Mama to help him and then only after he had studied the words for a long time. If earnest trying counts for anything, I’m sure those few verses he learned counted for a pat on the back from St Peter.

He was stubborn. In fact, he may have had the hardest head of any man I have ever known. My mother and youngest brother were the only ones who could get him to change his mind.

The most intelligent thing he ever did was to marry my mother. She made it through high school and even a little of college, before that auburn haired man made her his wife.

They almost never argued. Even when they were angry toward each other, she never publicly disagreed with him or put him down. She always let him and us children know that he was the man of the house. Of course she often had to take him over to the side and “explain” things to him when she knew he was about to make a mistake.

My daddy loved his family and he loved life. He was a very hard working man and he didn’t mind putting his boys to work. In fact, my brothers and I were convinced that he often lay in bed all night thinking of things for us to do the next day. 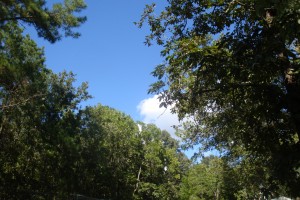 When the work was done however, he loved to enjoy life. He loved the beach and the mountains. He loved tractors, backhoes, motorcycles, go-carts, and golf carts. He used his backhoe to make a course of hills and valleys in the woods so his children and grandchildren would have a fun place to ride bikes. He and “the boys” built a go-cart racetrack on the back of the property and had races every Saturday night for years.

He had a full dress golf cart for driving to church on Sunday. It was enclosed in Plexiglas and had a siren and stereo system. He had a Harley Davidson motorcycle with chromed everything, parked in its own closed garage.

His favorite activity was to have a barbeque or oyster roast and invite all the neighbors to come over and join us.

I think the most important lesson he taught his children was to enjoy life as you live it. If you put off having fun until you get all the work done, it may be too late. My greatest regret is that he never got to know my children and they never knew him. I didn’t get married until a little before he died.

I pray that all of you might pay special attention to your fathers. Many of you have fathers who are still living and others have memories. Some of you may have difficulties with your father. Take time to ensure that you have done your part to foster good relations, whichever the case might be.

This is a revision of a previous article.

My wife and I were ending a good day of sightseeing in some of the most beautiful mountains in the world. To celebrate our anniversary, we had driven along part of the Blue Ridge Parkway in North Carolina. It was October and the tree-covered hills displayed every imaginable hue in a spectacular variety of fall colors.

Earlier that day, we had watched from an overlook as the morning mists rose up from the valleys below and spilled across the hills gradually covering them. It had been a graphic display of how this area had come to be called the Smoky Mountains. 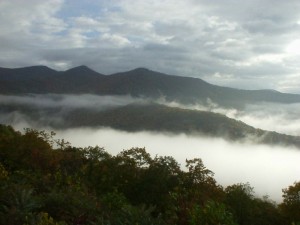 Seeking to avoid the Interstate and see as much mountain scenery as possible, we decided to take a back road through Pisgah National Forest. That route took longer than expected and we were glad to see a sign indicating a rest stop shortly after merging back onto the Interstate. When we arrived, we saw the stop stood in the junction of two interstates. Busy roadways surrounded the rest area.

I visited the restroom before finding a spot where I knew my wife would join me, near the coffee machines. As I waited, a small group around the snack machines grew in size and volume. Adults joined the kids in an animated discussion. Not curious enough to go over, I was surprised to see my wife step out of the group and walk toward me.

She had that look on her face. I didn’t know what was going on but I knew she was about to ask me to do something. “Come over here.” She motioned. With misgivings and curiosity, I moved into the edge of the crowd. There I saw the reason for the commotion. A young boy and girl were trying to feed a very frightened little kitten.

The kitten was very young, multi-colored, and starving. Obviously, hunger was causing it to come out of its hiding place under the machine to gobble the crumbs placed on the floor. I guessed it to be no more than a few weeks old. It bared the claws of its raised paw and hissed if one of the kids got too near. Wild, probably abused, its short life had not been an easy one. There seemed to be a crust in the corner of its eyes and it needed grooming. It was more pathetic than cute.

“Can we take it with us?” The boy was pleading with his dad. His “absolutely not,” response satisfied neither the boy nor girl. The explanation that they were far from home and the kitten was probably diseased did nothing to dissuade them. “But Dad, It’s going to die if we leave it here,” the girl’s plaintive cry was heartbreaking.

“Maybe it belongs to someone who lives near and will go back home,” Dad’s reply seemed borne of desperation.

“There are roads all around this place. It would be killed if it tried to leave.” This last statement came from my wife and my groan could be heard for miles (a slight exaggeration). The dad looked at my wife with such gratitude that I thought he was going to hug her. Someone else would take care of the kitty. His relief was so obvious that I expected him to start dancing.

“I’m sure this lady and her husband would love to give this little kitten a home.” He stated. By this time, my wife had stooped and picked up the kitten. Surprisingly, it didn’t scratch her and even allowed her to pet it a little. I looked at a mommy holding a baby and knew there was only one course of action for me. Complete capitulation.

The dad was already herding his kids out to the car. We were left holding the kitty. Half-heartedly I pointed out, “You know that the kitten is probably sick, we’re far from home, we have no container to put it in, and we have nothing to feed it.” She stroked it and it settled in her arm. I knew that for better or worse, we now had a kitten.

“Oh yes,” I added as I remembered the situation at home. “We also have a cockatiel. I don’t think the two will ever be friends.”

Anyway, we drove away from that rest area with a wild and very hungry kitten. Our first objective was to find it some food. We stopped at the first gas station and found they had nothing for kittens. They did have some packets containing cheese in one compartment and crackers in the other.

We quickly learned we couldn’t hand feed the kitten in the car. She was far too wild. We placed her on the ground beside it. When we opened the little packet of cheese, she attacked it. We watched her devour the cheese, licking every bit of it out of the compartment. We opened a small plastic cup of liquid coffee creamer hoping she would drink it. She once again bared claws and hissed for us to stand back. We placed the opened container on the ground. She spilled about half as she gulped the rest.

We decided to get her home quickly so we could feed her properly. Letting her roam freely in the car seemed to be a bad idea so my wife emptied a zip up gym bag. I picked her up and placed her into the bag. Her claws sunk into my hand and arm as soon as she saw what I was doing. She was just holding on and didn’t scratch. I gently placed her in the bag and let her remove her claws, minor pain. We left enough unzipped space to allow her to stick out her head. She seemed quite content, however, to retreat into the bag and curl up to sleep most of the time.

We tried to decide on a name for our kitten as we rode home. I mentioned before that we had a cockatiel; her name was Isabelle. After several proposals, we decided that the kitten’s name would have to remind us of our anniversary. Once we made that decision, Annabelle became an obvious choice. Isabelle and Annabelle, I doubted the similarity of names would make them friends.

It was such a wondrous thing to see that little kitten devour every scrap of meat we could find in the kitchen. We made a trip to the grocery and got food, litter, and a toy for it. A little food, rest, and security resulted in a cute and special kitty. In just a few days, she allowed our granddaughter to pet her and even put a ribbon around her neck. She had found a home. 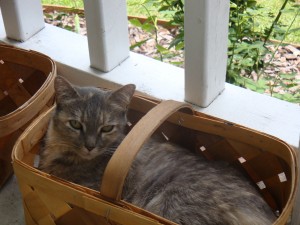 As I had predicted, Annabelle and Isabelle never became friends. In fact, special precautions were necessary when the two were in the same room.

A few weeks later when I got the bill from the vet for spaying and vaccinations, I only sighed. Annabelle had already become a member of our family.